Road tires are best for those who don’t really go to the different terrain as often or only drive for comfort and performance. There are more than plenty to choose from based on what you want to aim for such as Pirelli Cinturato P7 Vs Scorpion Verde which is good for the dry and wet grip. These all-season tires are pretty reliable but not the best as well and before deciding your choice, let’s see below about what they can offer and which of them will be the better option.

In this comparison, we are going to talk about:

Our cars need their tires to keep in contact with the road, pavement, terrain, and any surface that it is driven on. They cushion the wheel so we can gain traction on the proper surface as well as drive the car for longer. Since the compound is made of rubber and always in contact with the road, they are not going to last for a very long time. Even when not being used, tires have expiration dates when the compound will deteriorate and no longer be reliable.

Just like most things, tires are made in various types to provide different needs by the user and when it comes to road application, we have both all-season and summer tires. The reason why tires are often called based on the time of application and type of terrain they are made for is because the material and designs can vary widely depending on these factors. Many of them are more versatile and some are focusing more on their specialties.

As for road-specific use, the tire will be either all-season or summer tires such as Michelin Primacy MXM4 Vs CrossClimate 2, also known as performance tire. In terms of terrain both types of tires are only used on the road but the characters are quite different from each other. Summer tires are focusing on how they can provide optimum grip on both dry and wet surfaces. So, it may sound surprising for some people but summer tires are typically better on wet pavement.

The reason why is because they have a special compound which is created containing sticky additives to provide this grip regardless when the road is hot or when it is damp. Usually the tread patterns in summer tires are shallow with straight grooves, compared to those in all-season, as well as continuous ribs means more rubber is in contact with the road hence they are known for stability while cornering, braking, as well as doing acceleration. However, because many of them are asymmetrical, we may be more limited in tire rotation options.

The only part where summer tires are not wise to use is during winter or cold conditions because the compound gets frozen as well when in lower temperature making them not safe to drive with. Performance tires are also known to be less efficient in fuel economy but this is the opposite for all-season when in hot weather because summer tires have stiffer construction hence less friction and less rolling resistance while all-season creates more resistance.

There are lots of good tires in the market that can fit the type of application of different drivers. It is always best to choose the type of tires that match well with your car or vehicle type as well as the driving condition because not all of us are chasing over the same qualities. If you are here then we assume that a set of versatile tires will be the most ideal solution. They are going to provide a good grip in both dry and wet roads.

Most companies have a wide range of tire types to offer based on what the users want. For summer tires the common brands are probably Michelin or Goodyear but you can find them on many other’s collections as well such as Pirelli. This Italian brand is one of the most well-known when it comes to great tires so you will find plenty of interesting options from the catalog. Not all of them will be exactly the same to each other however.

Because summer tires are not as versatile, many of them are a mix of all-season and sport performance to get best of both worlds but it also means sacrificing some of the crucial abilities. If what you look for is something that is not too sporty but more versatile, Pirelli Cinturato P7 and Scorpion Verde are two ideal options to consider. They are labeled as summer tires but not as performance-focus and more of versatility or comfort.

These tires are summer-touring so we don’t think that they will be as amazing when it comes to general grip or handling performance, compared to the more performance focus such as Pilot Sport 4S for example. However, the people who install either Pirelli Cinturato P7 or Scorpion Verde may get a very good comfort for their ride and it seems that Pirelli is designing these tires also with respect for the environment as they apply the green tech for the two.

Now let’s see why Pirelli Cinturato P7 and Scorpion Verde are promising options for the road application, starting with Cinturato first. This tire is said to be made using a low resistance tread compound which features advanced polymers to improve grip on wet and dry roads, so it can reduce the fuel consumption and emission too. The compound is then molded into an asymmetric tread design for an even wear but also meant to reduce noise level. The tire has a robust outboard shoulder for enhanced lateral grip while the four circumferential channels will help channeling water flow. 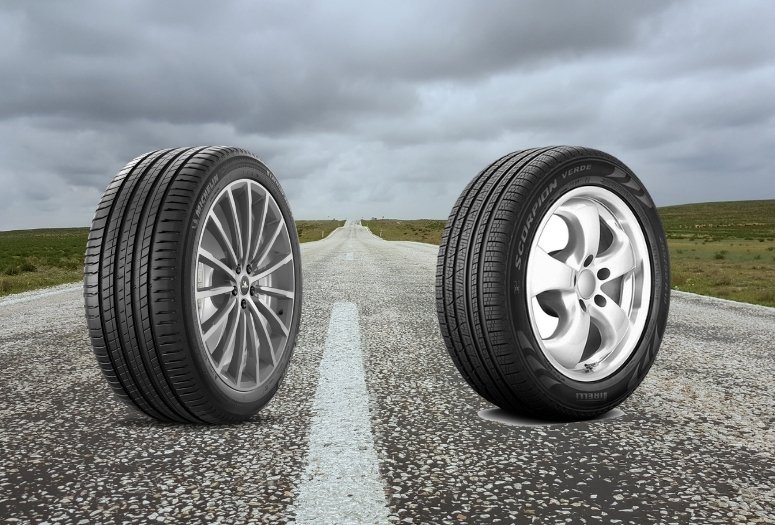 The tire is rated for summer application so it is not reliable for winter season but it seems the Cinturato P7 tried something with its independent tread blocks and multiple sipes in order to provide some biting edges when it comes to light snow. On the internal structure this tire has twin steel belts which are reinforced by nylon cap plies to provide high speed-durability. As for the sizing, this tire is available in 15 to 20 inches.

Scorpion Verde on the other hand is very similar to Cinturato P7, not only because it is meant for comfort but also because it is based on the greed idea; Verde means green in Italian. It is designed as a tire with low rolling resistance and weight, especially when compared to previous tires by the brand. The Verde is made of silica tread compound combined with asymmetric tread design and optimum rubber-to-void ratio as well as uniform contact patch which combine dry traction with uniform wear.

As you can see, the tire has these four wide circumferential grooves to remove water from the contact patch and resist hydroplaning but it is also useful for wet traction. There is a longitudinal siping too for improved lateral stability when you have to drive on a loose surface while its high-density lateral siping is meant to enhance the wet and winter traction. On the sizing, this tire is available from 16 to 22 inches.

Now for the most important part, let’s see what Pirelli Cinturato P7 and Scorpion Verde can offer or how they perform in real life but, in case you are chasing over sport or performance, neither of the two will be a great choice. We do think they behave very similar to typical all-season and not the best in the market but in comparison Verde is much better in dry traction. It is more stable and sticks to the surface firmer which is why it is more confident at cornering, braking, and acceleration too.

Wet performance is not amazing but Verde is also better here by maintaining the proper traction even when the road is damp. Cinturato P7 loses some of the grip a moment when you maneuver and this is even more prominent in wet surfaces yet, it is only at a higher speed so for everyday driving we still think both are very reliable. This trend continues to the winter traction and while none of Pirelli Cinturato P7 and Scorpion Verde are made for this application, some probably have no choice.

The Verde is not a confident tire on snowy roads but it is still slightly better compared to Cinturato because we do not recommend driving with the P7 during this cold season as it can be too slippery to gain adequate traction while Verde can handle light snow moderately.

Both touring tires shine best for a mix of reliability and comfort. They are not the best in both worlds however so we are getting a good traction with good comfort but not on the amazing side. In comparison Verde is actually better at handling especially dry and wet traction because it is more predictable, stable, as well as sticking well to damp and cold roads. Surprisingly, none of them are impressive when it comes to ride quality and more similar to typical all-season.

There is no bad option but personally we will recommend Scorpion Verde for this tire that has the better performance. It is sticking well on dry and wet roads while maintaining some for the winter season, and in addition it is available on the larger sizes.