Riding our bike is fun but when everything is on check to give you the best riding experience. There are many things that can affect our fun/comfort while riding and one of them is the tire for different tire will give a different ride as well. For those who ride a cruiser, Dunlop D404 vs Metzeler ME880 are two nice option to choose since they are made for the application. If you are also eyeing these models, go check our article below to decide which suit your bike better. 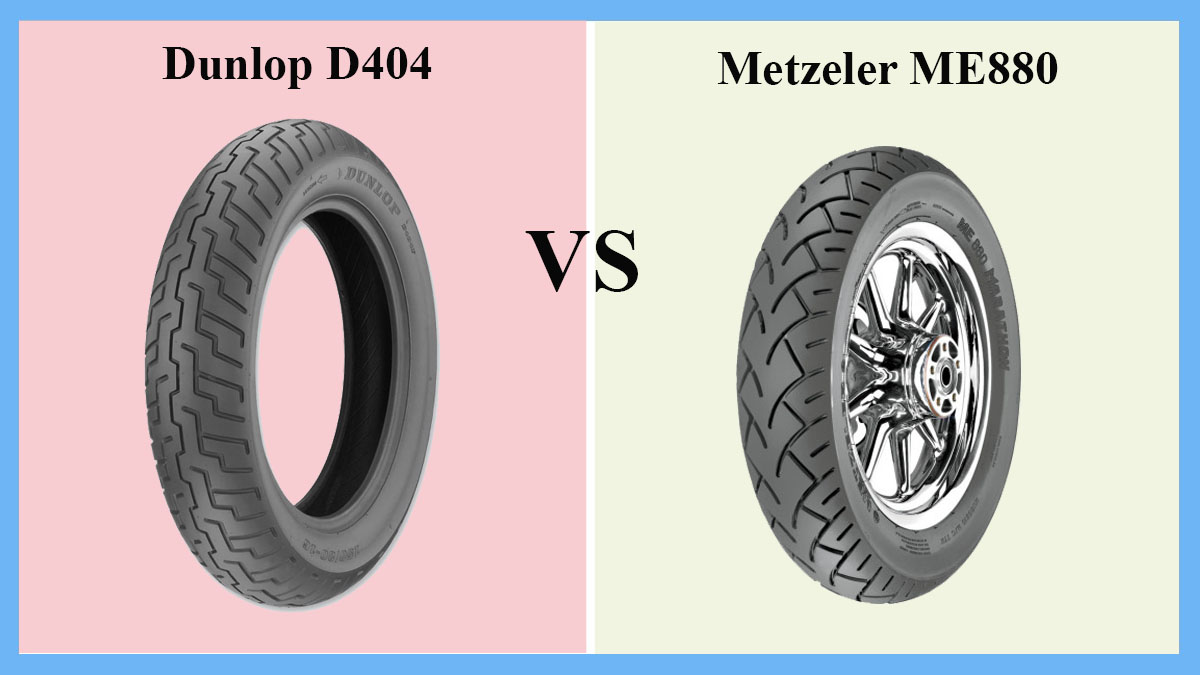 Tire is not something that will last forever because depend on how we ride our bike or how often we goes on a tour, we may need to replace them more often or least just like with any tire. In general, a bike tire should not be kept above 5 years because its performance may be decreased along the years. However, we can still use them for up to 10 years as long as it still can handle the ride.

To see whether you need a new tire or not yet, we can check them both on the front and rear part. First, see the thread pattern and make sure it still have between 1/32 and 2/32 thread pattern which is dictate by the State and Federal regulation. The one part that goes first is the middle part since this is where they mostly get in contact with any surface so it is not surprising to see them getting thinner faster compared to any other part.

The second is see if there is any defects because while the tread still there and looks good, a tire that show a defect such as cracked on the sidewall is not going to work well anymore. This type of defect is also called as dry rot and is definitely a sign to replace your tire. In addition, the tire may be worn out or have square profile which makes the bike feels uncomfortable when taking turns compared to when they are still new.

Beside these two, there is actually an easier way to tell if we need a new tire or not because as the one who rode them everyday, we should be able to distinguish something on our bike whether it is the engine or the tire. A slight different feeling on how the tire respond to our steering or when taking turns as well as taking a smooth/rough surface can be an indicator to see how the tire performance and a prominent change is a sign to start looking for a new pair.

While all tires promise to be the best for rider, not all of them are the same and just like when picking anything, it is all down to our preference for we may ride a different bike whether it is type or size and the main function of the vehicle itself. Those who ride a heavier bike should look for a tire with higher load rate while we with standard cruiser can pick the lighter one.

There are so many options out there and while it is helpful to make sure we always get the model that suit us the most, it can be very confusing as well, moreover, if we have several favorites to pick at once. If you need a quick choice, in our opinion it is good to start from the brand with many users or those like by other rider as well because they have a high chance to please us as well and one of them is Dunlop. 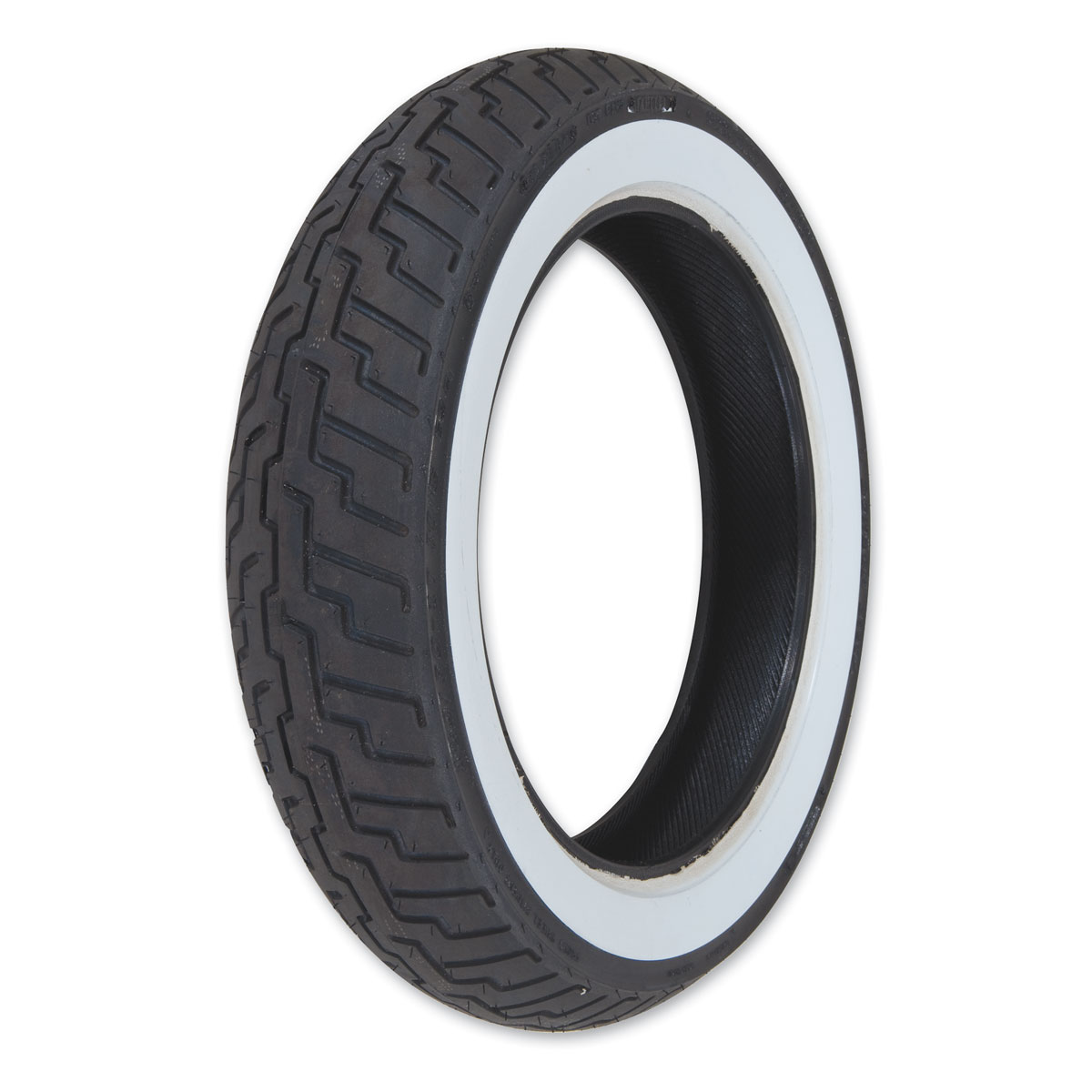 This brand is among the best when it comes to cruiser tire with their huge collection of model to give their user a set of options matching with their bike and application. If you are here, chances are you ride a cruiser and from the brand, we have Dunlop D404. This model is practically one of the most popular model we can get with a fairly affordable price and dependable performance. There are also another model for heavier bike, check it on our Dunlop D404 vs D402 here.

Dunlop D404 is created for standard bike, cruiser and those with older bike models because of the huge sizing options they have. It seems that many people also mix them with another tire due to the versatility.

This tire is available in both front and rear version and the one we put as an example picture above is the rear part. It is an all-season due to the proper design especially on their thread pattern. It used a standard offset groove pattern which is the same like D402 and D401 used for Harley bikes. This pattern is offering a good mileage and a dependable water management due to its channels and siping especially on the rear tire.

Another benefit from this tread pattern is we are going to get a stable ride and avoid those nibbling or tracking at different speed so we can enjoy the ride better. It is made with single compound so the rate load may not as heavy as the other two mentioned above. In addition, there is two options, the black and white sidewall but only on certain sizes to give you more choices.

The most frequent things we heard about Dunlop D404 is how they are such an affordable tire for your bike without breaking the bank. Many people have a nice experience with this tire because it can provide a fairly comfortable ride and a nice handling as well in different speed. When riding on wet road, it is still feels good and just have a slight difference in grip compared to when riding on dry road. What’s concerning is the life of the tire because many people are complaining about the quick wear.

It is indeed not made for heavier bike so don’t pick this model if you are riding a Harley Davidson. Probably due to being offered in such an affordable price, the tire seems to not last very long for it prone to wear more between 1000 to 3000 miles.

Dunlop D404 is indeed a good option for anyone who are more concern about getting a quick change that won’t make us spend a huge sum of money. However, with a price comes quality so we can’t ask for much for what we spent. If you are fine with spending more to get a more capable tire especially on the wear, Metzeler ME880 may fit your preference better. This tire is made for cruiser and heavy touring bikes with a special carcass.

If you have been riding for quite some time, we are sure you are also familiar with this model because they have been in the market for more than a decade. We can see it on heavy bike, Harley Davidson and metric cruiser used by so many people which is not surprising because they do work great and dependable. It is also among the most popular model from the brand with over a hundred different tire sizes.

The way Metzeler ME880 is designed which is specific for heavier bike to give the rider a more comfortable ride especially if you often ride in a long distance. The zero degree still belt also ensures outstanding dimensional stability for a higher freedom and tuning. The tread pattern is designed with computer and has offset grooves alignment for a more uniform characteristics and low noise. It also has an anti-circumferential which mean they are almost perpendicular or in an angle.

By not having a circumferential long grooves that goes around the tire, it is designed to prevent nibbling since there is no nibbling factor toward grading in the road and different ridges in the road. In the end it is going to keep the bike to follow the type of lines that run parallel with the tire.

The reason why Metzeler ME880 is still being one of the most popular or best-selling tire for cruiser is very prominently noticed in the comfort compared to many other similar tires especially in higher bike. In addition, it is providing a nice grip even when we are riding after the rain because it stick to the ground nicely which mean the bike can go faster so in general, we feel like it is sportier than many other bike tires.

In addition, this tire is also stay in the bike longer because the wear is practically uniform and able to let us enjoy the ride longer. It is not the longest you can get in the market but for the budget, we do feel like it is wear impressively.

Now, let’s compare Dunlop D404 with Metzeler ME880. As you may already know, the difference between these tires is on the capabilities including the comfort and wear as well as performance. Metzeler ME880 is also suitable for heavier bike like Harley Davidson as opposed to standard cruiser and metric bike for Dunlop D404.

All in all, the decision is all yours to make because we may have different preference and different bike. If you are looking for affordable option and ride a standard or cruiser bike, Dunlop D404 is a nice choice but for those who want a more capable tire, we do recommend you to pick Metzeler ME880.